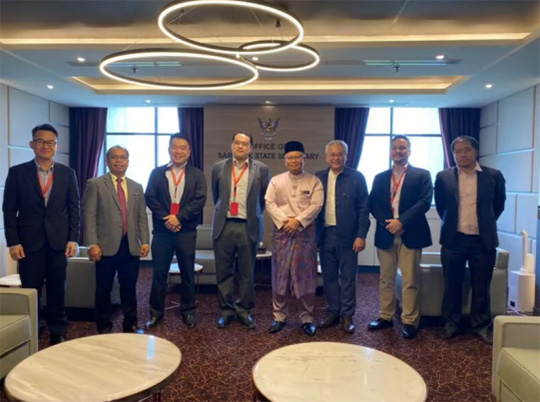 Mohamad Abu Bakar (fourth right) with Kiu (on his right) in a group photo with others during the courtesy visit last
Friday (Aug 19, 2022). Photo: Soppoa

KUCHING, Aug 21: The Sarawak government will look into the feasibility of revising the State Sales Tax (SST) on crude palm oil (CPO) from the current threshold of RM1,000 to RM2,000 following a dramatic increase in cost of production.

The industry pays SST when CPO reaches RM1,000 per tonne and caps at 5 per cent maximum when the CPO price is above RM1,500 per tonne. This existing threshold for levying CPO was set in 1998 when the cost of production was lower.

During the meeting, Kiu informed Abu Bakar that a survey carried out by Soppoa showed that the cost of production ranged between RM2,000 and RM2,300 per tonne from 2014 to 2019.

“Recently, due to higher input costs, many companies reported cost of production was closed to RM2,500 per tonne. Therefore, a new threshold at RM2,000 is more reflective of present industry landscape,” he said.

Kiu also said that the suggestion to revise the existing threshold was brought to Premier Datuk Patinggi Tan Sri Abang Johari Tun Openg’s attention earlier this year and thanked him for consideration.

Following that, Mohamad Abu Bakar has agreed to forward the matter to the State Financial Secretary for further study.

At the same time, Mohamad Abu Bakar has welcomed the idea by Soppoa to having a Sarawak-based palm oil agency to focus on the development of the palm oil industry in Sarawak.

Soppoa revealed that nearly 44 per cent of oil palm in Sarawak is planted on peat soil that is marginal and prone to flooding. On top of that, it is more expensive to manage compared to mineral soil estates.

“Peat oil estates also susceptible to many other problems such as high incidence of pests and diseases, lower fresh fruit yield and poorer oil extraction rate to name a few.

“Thus, Dato Sri (Mohamad) Abu Bakar agreed that there should be more research and development (R&D) to be carried out to improve the productivity and sustainability of oil palm in Sarawak as this crop contributes significantly to the State’s economy.

“He also stressed that there are many excellent learning and research institutions in the State which can specialise in palm oil’s R&D.

“He has agreed to have more industrial engagements in the future and stressed that government departments are responsible to facilitate the private sector in their capacities,” the statement emphasised. – DayakDaily