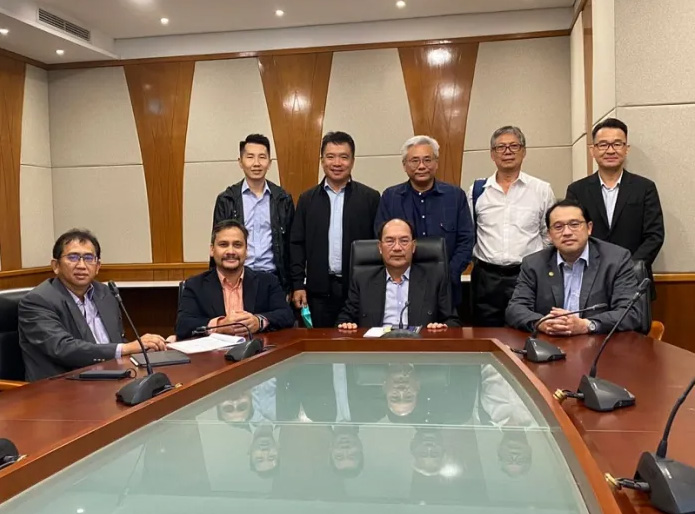 Gerawat (seated, second right) in a photo with the delegation from SOPPOA

SOPPOA chairman Eric Kiu said that unlike other states, only Indonesians are allowed to work in oil palm plantations in Sarawak.

“Even with the opening of borders (in April) and a series of announcements by Putrajaya, Sarawak still has yet to witness any inbound foreign workers for employment in the oil palm sector.

“This industry has suffered from production losses as a result of labor shortages since the pandemic and needs about 45,000 foreign workers to bring the operation back to normal,” he said in a statement today.

Kiu has made the suggestion that the Sarawak government consider sourcing foreign workers from more than one country during a courtesy call on Deputy Minister in the Premier’s Department (Labour, Immigration and Project Monitoring) Datuk Gerawat Gala yesterday (June 29).

In the meeting, Gerawat also informed the Association that his Department has recently submitted a paper to the Cabinet to include three additional source countries for foreign workers.

Noting their predicament, Gerawat also agreed that there were many signs that the Indonesian government does not encourage its citizens to work in the country, more so with the development of Indonesia’s new capital Nusantara that would require about one million workforce.

. The Deputy Minister also informed SOPPOA that the Department has looked into streamlining all the processes for foreign recruitment with priority to cut short the processing time.

Gerawat also iterated that his department is acting as a ‘one-stop centre’ for foreign worker recruitment and by incorporating ICT, the recruitment processing time should be improved dramatically soon. — DayakDaily