100 years of glory and the next horizon

AS I sat down to write this, news has begun to stream in on the victory of Emmanuel Macron in the French presidential election.

It is my hope that a centrist president will view palm oil in a rationale fashion and facilitate both countries to work towards a win-win formula.

Certain French legislators have been a bane for the palm oil industry, with their attempts to introduce discriminatory and unfair taxes that can severely curtail the entry of palm oil into France and cast a shadow on its competitiveness in other parts of Europe. 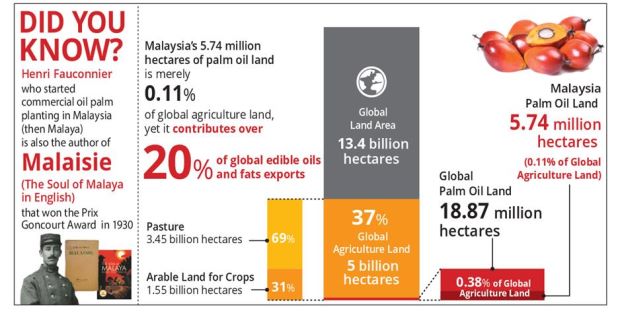 Ironically, it was a French who started commercial oil palm planting in the then Malaya. Having imported a few bags of seeds from Sumatra, Henri Fauconnier planted on trial plots in Kuala Selangor in 1914 before establishing the first commercial plantation in the neighbouring Tennamaram Estate, Batang Berjuntai (now Bestari Jaya) in 1917, exactly 100 years ago.

The latter marks the historical milestone for palm oil in Malaysia and tomorrow, we will commemorate the 100th year of commercial oil palm planting.

In the 19th and early 20th century, the Europeans pioneered rubber and later, palm oil plantation development. Fauconnnier and his associate Adrian Hallet, a Belgian, who founded Socfin SA, were among them. Others include Scots and Englishmen such as Alexander Guthrie (the Guthrie Group), Daniel and Smith Harrison and Joseph Crosfield (Harrisons & Crosfield), William Middleton Sime, Henry d’Esterre Darby and Herbert Milford Darby (Sime, Darby & Co) as well as Aage Westenholz, a Dane, who started United Plantations in my home district of Teluk Intan, then known as Teluk Anson.

This was followed by the formation of the Federal Land Development Authority in 1956 to spearhead development and resettlement programmes to eradicate poverty through farming of rubber and oil palm. Then came the era of the towkays – Robert Kuok (PPB Oil Palms, later Wilmar), Tan Sri Lee Loy Seng (KL Kepong) and Tan Sri Lee Shin Cheng (IOI Group).

Over these 100 years, we have witnessed extraordinary growth and innovation.

From its humble inception, the palm oil industry is today the main pillar of the commodities sector, contributing RM67.6bil in export value in 2016, equivalent to 6.1% of Malaysia’s GDP. With more than two million Malaysians involved on the palm oil value chain including 644,522 smallholders, its impact on the well-being of the rakyat is huge.

Globally, Malaysia produces 8.5% of oils & fats and commands 19.1% of export share and yet only utilises 0.11% of global agriculture land.

Its innovative journey is no less amazing. Not only is palm oil used as edible oils and fats, it also permeates every aspect of our daily lives. Palm oil is the “Intel Inside” of foods, consumer and household products, and fuels and lubricants. From the moment you wake up until you hit the bed, you may be consuming a palm ingredient or derivative without even knowing it.

Toothpaste and skincare products contain palm-based glycerine and emulsifier. Our meals are prepared with cooking oil made from palm olein. To supplement our diet, we take tocotrienol, a very potent anti-oxidant.

Palm oil products can only be this intrusive because they are effective ingredients that are produced efficiently and innovatively through years of research and development.

For example, not many are aware that our estates used to employ “puffing ladies”, whose job were to puff pollen collected from male flowers, mixed with talcum, to female flowers when they are receptive.

The stroke of genius to this challenge came from another Scot, Leslie Davidson, who became convinced that the oil palm pollinating agent was an insect instead of wind. He lobbied for studies to be done, and with Mahbob Sulaiman, raised the funds for the research which was done by an eminent Pakistan national, Rahman Anwar Syed. Elaeidobius Kamerunicus, or commonly known as the oil palm weevils, landed at the Mamor Estate in Kluang and Pamol Estate in Sabah in 1981, and the rest is history.

Just as the palm oil weevils are catalytic to the surge in yield and productivity, other research and development efforts acted as boosters. The Oil Palm Genetics Laboratory consortium that was formed in 1962, for example, yielded phenomenal results in pest control, use of fertilisers, improved seedlings, labour productivity, processing efficiency and oil quality.

The establishment of Universiti Pertanian Malaysia (now Universiti Putra Malaysia) in 1973 and the Palm Oil Research Institute of Malaysia (Porim) in 1979, expanded and accelerated R&D into genome, biodiesel, biomass, food and non-food applications and sustainable standards.

This role is now led by Malaysian Palm Oil Board, formed via the merger of Porim with Palm Oil Registration & Licensing Authority in 1998.

The war against palm oil

Despite these successes, our road to 100 years has not been the easiest. External attacks abound. As we made inroads into the United States as an alternative vegetable oil to soybean, a concerted campaign linking palm oil to increased risk of coronary heart disease (CHD), was mounted in 1987.

Then Porim director-general Tan Sri Dr Augustine Ong led a research on palm oil nutrition and coupled with a concerted campaign targeting the American Food and Drug Administration as well as the media and nutritionists, led to the demise of the “anti-tropical” oil campaign.

And yet as the battle was won, the end of war is not in sight.

Deforestation is the “new CHD”. This time, the opponents are primarily Europeans and the assault includes the French ‘Nutella tax’ which attempted to raise palm oil import tax to EUR300 per tonne and the more recent resolution by the European Parliament calling for single certification of palm oil entering the EU.

It is essentially a trade issue camouflaged as an environment protection measure. This is despite the Food and Agriculture Organisation of United Nations validating Malaysia’s forest cover of 55.5% and if you include agriculture tree cover, a total green canopy of 85%.

Food safety is a relatively new issue. The European Food Safety Authority in mid-2016 highlighted the occurrence of 3-MCPD and glycidyl in all oils and fats, including palm oil. Unfortunately, the campaign of misinformation resulted in some Italian supermarkets removing products containing palm oil from their shelves.

The Government has taken swift action by making a special allocation to assist in technology adoption that will reduce its occurrence in Malaysian palm oil. We are proactive in tackling the contaminants and hope to be ahead of the competitors in eliminating them.

How palm oil will be remembered another 100 years from now will depend on our vision and conviction.

In 2010, the Government recognised the importance of palm oil by identifying it as one of the 12 National Key Economic Areas (NKEAs). Over the past six years, precise interventions have been undertaken to shift the industry into a higher gear. About RM1.54bil and RM1.35bil were allocated to the Palm Oil NKEA under the 10th and 11th Malaysia Plan. Emphasis in the upstream is on productivity through a new planting and replanting programme, and intensified extension services to improve best practices, mechanisation and oil extraction rate.

In the midstream, efforts were made to ensure methane avoidance is accelerated through push-and-pull strategies such as evolving regulations as well as profit-generating options such as electricity generation to tap the Feed-In-Tariff and bio-compressed natural gas production.

Great strides were made in the downstream where the structural shift towards oleo derivatives and food and health-based products is evidenced by the RM3.3bil private investment commitment.

A vision for the future

Several clear themes are emerging in my mind as our way forward: sustainability (both productivity and environmental), increased value-addition and new value-chain opportunities. In the immediate term, the accelerated roll-out of the Malaysian Sustainable Palm Oil (MSPO) certification is totally crucial. The single certification threat as proposed by the European Parliament must jolt us into realising that MSPO needs to be recognised universally and not become our unilateral initiative. As smallholders make up almost 40% of palm oil hectarage, the MSPO is a key bridge to ensure compliance to sustainable standards with a reasonable cost and optimised process for those with less resources.

MSPO can help improve productivity but at the same time, with scarcity of both land and labour, new ways for productivity enhancement must be explored and pursued. With the oil palm genome sequence breakthrough, more effort could be focused on improving productivity through both physiological and physical attributes. Meanwhile, the advent of Industry 4.0 and digitisation begets the question as to whether autonomous technology, Internet of Things and Big Data can be leveraged to boost field efficiency.  More value can certainly still be recovered in the milling, refining and downstream processes.

For example, we need to examine how palm oil mill effluent and biomass such as empty fruit bunches, empty mesocarp, kernel shell and kernel cake can be tapped for value-addition, on top of measures to continue oil extraction rate improvements. For too long, biomass has been a buzzword but we have yet to take it seriously for palm oil.

Malaysia has yet to expand the value-chain of the palm oil industry to its fullest. As a small country, the world is our market. Yet, our presence and penetration have much more room to grow.

So, as we raise a toast to 100 years of commercial oil palm planting, this is also an opportune time to reflect. Timely reflection will enable us to reiterate some existing plans and perhaps reset some courses we have embarked on. As we pick up the conversation with Malaysians through the TN50 platform, perhaps it is also time for the palm oil industry to come together and chart our roadmap to 2050.

Datuk Seri Mah Siew Keong is Plantation Industries and Commodities Minister. Commodities Today and Beyond is his op-ed to share his views, hope and vision for commodities with everyday Malaysians

(Taken from The Star)